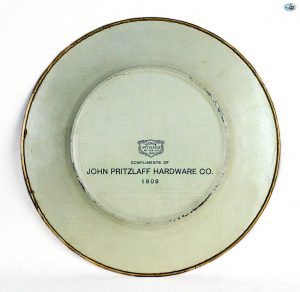 Offered is an adorable 1905 lithographed tin metal by Vienna Art Plates depicting in magnificent detail the portrait of the Queen Louise of Prussia. The antique plate is the compliment of the John Pritzlaff Hardware Company.

Queen Louise of Prussia (1776–1810) was the daughter of Charles II, Grand Duke of Mecklenburg-Strelitz and his wife of Frederick William III of Prussia. Her legacy became cemented after her extraordinary 1807 meeting with the French Emperor, Napoleon I at Tilsit. She met with the emperor to plead unsuccessfully for favorable terms after Prussia’s disastrous losses in the Napoleonic Wars. Her meeting with Napoleon led Louise to become revered as “the soul of national virtue”.

John Pritzlaff Hardware Company, founded by John C. Pritzlaff in 1850 was the largest hardware company in Milwaukee, Wisconsin and eventually became one of the largest wholesale hardware companies and iron supply houses in the Northwest. It was known for selling hardware, sewing machines, and toys through mail order catalogs to wholesale accounts throughout the United States.

This wonderful Vienna Art Plate is in perfect vintage condition with minor scratches on the back. It measures 10 inches (25.4 cm) across. For authenticity, the hallmark of ‘Vienna Art Plates, PAT. FEB. 21ST 1905’ is visible on the back of this adorable antique plate.

Guns are not shipped outside the United States.